After three series in rapid - if not numerical - succession, and U2J now residing in the cultural Mecca of London, we look forward to the coming three-section season of Spade-Men X! 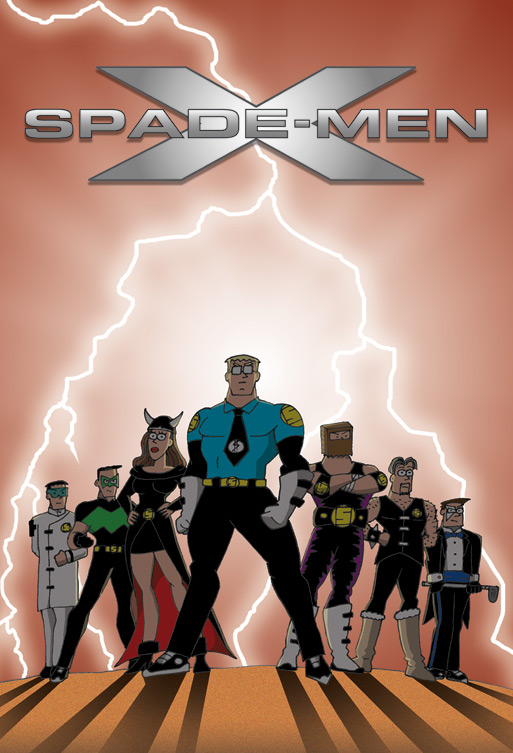 Comic Characters: Who actually owns them?

With the enormous success of the Spider-Man movie, the comic book industry has received some much-needed promotional exposure. Leading executives at both Marvel and DC are hoping this success will boost comic sales, which have been suffering since the mid to late nineties. Many blame it on the increased popularity of gaming consoles such as the Playstation and Nintendo 64, driving people away from traditional comic entertainment. Others blame the fall in sales on the increased cost in paper, which resulted in comic prices increasing dramatically.

Still, comic books such as The Spade-Men are destined always to have a place in society. The crazy adventures of such characters as Mock-Man, The Spade, Super-Jefferys, Doc Hard and Mr Jiggs will always have a place in the imagination of people seeking to escape the boring everyday grind. For instance, who could possibly not have enjoyed storylines such as The Spade leading an unsuspecting Doc Hard into a date with Bertha the Angry Lesbian, or the castration of a violent Mr Jiggs? Such antics will always stimulate and dazzle the imagination of the reader and immerse them into a beloved fantasy world.

However, with comic book adventures so entrenched in the psyche of its reader, is it ever possible to create something truly original? Perhaps even the concept of having a superhero would be considered plagiarism in some form, despite the uniqueness of the characters involved. Can we therefore conclude that the lawsuit brought against Understanding Jon for his use of the character "Mr Jiggs" is the start of something that threatens creators throughout the comic industry? On 3 June 2002, the estate of the late George McManus launched legal action to stop Dirty Spader Productions from using the name and image of the character Mr Jiggs. The estate of the late George McManus claim they own the rights to the "Jiggs" character that made its first appearance in the comic strip Bringing Up Father, which began in 1913. This strip, with its two characters Maggie and Jiggs, provided a caricature of the American life in the early 20th century and was one of many popular creations of George McManus.

However, Dirty Spader Productions are not about to let this hinder production of its enormously popular Spade-Men title. Spokesman for the company, Charles Manual, has stated that "Mr Jiggs is an original creation, and any actions disputing this are both flawed and false." Creator/Artist of the Spade-Men, Understanding Jon did not have any verbal comment to make, but was seen responding with physical gesticulations using his hands and groin when questioned about this issue during a recent press conference. The specific meaning of his very animated response is best known only to him. So, with neither side in the dispute willing to back down, it appears that it will be left to the Courts to decide whether Understanding Jon's "Mr Jiggs" breaches copyright.

This lawsuit brings this reporter to ask himself many questions. For example, will the Spade-Men be forced to confront evil without Mr Jiggs on their team? Should Mr Jiggs have forever remained the property of George McManus, and therefore firmly entrenched in the out-of-date comic strip Bringing Up Father? One can only wonder if the attire donned by Mr Jiggs in the Spade-Men comic would have found acceptance in 1913, part of an era steeped in conservatism. Maybe Mr Jiggs's appeal is so universal that it transcends basic copyright law? Anyway, enough from me - we all have much to ponder.

The Spade-Men: What does it really mean?

Earlier this year, without much fanfare, the first issue of The Spade-Men was released. Although only die-hard comic fans greeted its appearance, the series has gone on to be the most successful title in comic history. Other comic giants, Marvel and DC have been unable to match its success and have conceded defeat. Marvel CEO, Hugh Jorgen, commented yesterday "Its amazing success hinges on the creators ability to induce reader's pity for the characters. I suspect it's time for us to file bankruptcy again."

At the centre of the series is creator, Understanding Jon. Although the Spade-Men series is not his first comic title, its clear success has shone a spotlight onto the usually reclusive creator. Very little is actually know about him by the public, and many close to him have commented that he prefers to maintain his privacy above all else. Still, the series continues to go from strength to strength, and with talk of an up-coming movie, the series' popularity can only grow. It was such a shock therefore, when in an interview with Rolling Stone last month, Understanding Jon announced that the Spade-Men will end with issue 100. Why a creator would announce the termination of such a popular series at its zenith is anyone guess, although many suspect that the pressure of producing such a series was beginning to take its toll on his health.

It would be wrong to conclude that the Spade-Men series had been all smooth sailing for the Understanding One. Legal issues have plagued the series progression. Late last month, Paramount sued the Spade-Men creator claiming that the character "Mr. Jiggs" was based on an acting monkey used in numerous movies produced by the film company in the late 1950s. Although Understanding Jon denies any correlation, there does appear a strong similarity. An out-of-court settlement appears certain. Parental groups have also lashed out at the numerous bum jokes that appear in the script and blamed it largely for the declining morality of today's youth. Yet despite this, the popularity does not seem to lose momentum.

As the series rolls towards issue 100, many in the comic industry are still trying to explain its success. Many will continue to ask why characters such as Mock-Man, Super-Jefferys, The Spade and Doc Hard can bring such universal appeal. However, for this journalist, I will simply avoid these issues and stay affixed to my email for the further adventures of the Spade-Men.

Spade Men: The End of an Era

As the Spade-Men comic series draws closer to an end, comic fans have begun signing petitions across the globe calling for the series to continue. Creator, Understanding Jon has been having intense meetings with his company's Executive Directors late into the night, as they attempt to convince him not to end the series. With Spade-Men's sales figures increasing by the month and merchandise sales skyrocketing, it is little wonder that many are trying to halt the series' finish.

Late last month, Time Magazine named all the characters of the Spade-Men comic "People of the Year". Times Editor, Phil McCrevice, stated that the magazine's usual category of "Man of the Year" was changed so as to include the comic book characters. He continued by saying that these characters "have clearly shaped a generation's thinking and deserve the accolade more than anyone else."

Sources close to the Understanding One have commented that the creator is adamant about the series finishing at issue #100. He wishes to maintain the integrity of the characters and wants to finish the series on a high note. Despite this, Understanding Jon has admitted to being in discussions with movie executives concerning a possible Spade-Men movie. An unconfirmed report has suggested he has already signed with the film company Woodglue Productions for rights to produce the movie. Understanding Jon and his staff are unwilling at this stage to confirm or deny the rumours.

However, even as the series draws to an end, the Spade-Men comic and its creator are still unable to avoid criticism. Early this month, a number of newspapers in the United States, including The New York Times and Washington Post, ran a series of articles criticising the inclusion of various musical characters into the strip. Critics claimed that this was merely a tactic by the creator to win further affection from his real life Opera Singer girlfriend. Understanding Jon's comic company issued a press statement in response to this, claiming that "it was his comic and he'll do what he likes". In addition to this, the company just recently lost a highly publicised legal battle. A Parent Lobby Group in Phoenix, Arizona successfully sued the company for $150 million claiming that the action figure "Mr. Jiggs" caused horrific childhood trauma. As reported in the July addition of Time Magazine, this same character is also at the centre of legal action from the movie company Paramount, over alleged copyright infringement.

Nonetheless, anticipation still engulfs the globe over how the Spade-Men series will end. With Understanding Jon determined to keep the series' ending a secret, I guess this journalist will have to continue to wait by his email to see the conclusion. He is comforted by the fact that he is joined by a global audience doing exactly the same thing. 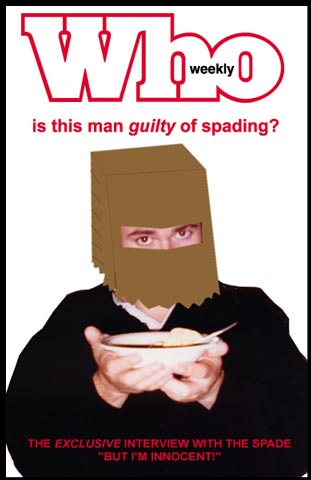 Moments after a verdict of "Guilty of spading" was handed down, the judge was revealed to be none other than Mongo the Dancin' Doofus... and so, one of the great questions of the universe remains unanswered, at least in legal circles.
Return to the New Viewer's Guide